While writing Alpha Claimed—Korbin and Layla’s story—readers were introduced to Merrie and Sparks. For the last few months Merrie has been lingering in my mind, nagging me to write her story. Rather than allowing me to continue the journey to deal with Lorcan’s group in Washington D.C. Merrie demanded I write her story now. She wouldn’t wait and her demands overpowered the voices of those in the next book. I hope you understand this slight detour and I promise we’re back on track with the mission to make the world safer for the tiger shifters in the next Alaskan Tigers book—Claiming Their Mate—coming in March 2020.

After years under an abusive and vindictive Alpha, Merrie nearly loses herself to her tigress, sending her to the brink of going rogue. She’s finally putting the pieces back together and reclaiming her life. And through it all is one man.

Sparks has been her rock.

The one she gave her heart to.

Forever the one who got away.

So why, when he touches her, does she feel the magic so many of her kind have spoken about? And why does he look at her like he’s ready to claim her?

As she’s regaining her balance between her human and animal side, she realizes the truth. And it is a truth neither of them is ready for. 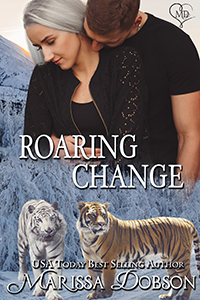 I’m doing a readers survey to help me finish planning 2020 and beyond. If you could fill out the survey you’re entered to win a $25 gift card. Winner will be announced on February 1st in my newsletter.