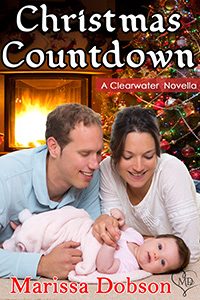 Formally The Twelve Seductive Days of Christmas published in the Believe Anthology.

Jasmine Pierce has been burned by her family and by love. Leaving her past behind, she longs for a quiet place to start over and raise her daughter. Upon learning about a grandmother she didn’t know she had, she inherits not only a house, but a chance at a new future.

Snowbound in a cottage, twelve days before Christmas, Jasmine meets Logan Clarke. His kind personality and loving nature has her considering the possibilities, but she’s already played the game of love and lost.

Could this have been her grandmother’s plan all along? For Jasmine to return home and find the missing pieces, bringing her dream of a real family and her heart’s longing for love finally within reach?

Trudging through the snow to the deck, the winter breeze chilled her bones. She would need to buy warmer clothes and a winter jacket for both her and Alyssa. Jeans and sneakers just didn’t cut it in all this snow. Struggling to unlock the door with already frozen fingertips, she attempted to turn the key in the unforgiving lock. “Damn it!” She bent to concentrate on the lock when Floppie started barking. “Shh, boy. I know you don’t like the cold either. We’ll be inside in a minute.” She patted his head, but that didn’t quiet him.

“You must be Jasmine.” A deep, husky voice called from behind, startling her.

She whipped around to face the stranger, her senses immediately on high alert. “Who are you?” She raised her voice a notch louder so he could hear her over Floppie’s continuous barks.

“Here, let me help you with that.” He moved in between her and the door and, taking the key from her hand, he expertly unlocked the door. He moved aside and shrugged. “Years of practice. You have to know how to slide and click the old thing.”

She stood rooted to the deck, blinking like a complete fool. With fear coursing through her, she didn’t know if she should run for the car or slug this man while she had a free hand.

He extended his hand. “I’m Logan, I rent the cottage by the lake.” He nodded to his right. “I’ve been expecting you. I saw you pull in. I thought I would offer to help unload your car and check on the old furnace. It’s been acting up lately.”

She couldn’t tear her gaze from his eyes. He had the face of an angel, high cheek bones and incredible, emerald green eyes. His wavy, chestnut brown hair held tight to his forehead. She continued her inspection. The front of his heavy, winter coat hung open, giving her a glimpse of the tight thermal shirt that clung to his chest. He obviously worked hard to achieve such a sculpted body.

Her apprehension dissipated as she peered back into his eyes. She wasn’t sure she could trust him, but if he was willing to check on the furnace while she got Alyssa settled, Jasmine was willing to take a chance. Mr. Johnson had warned her that a tenant rented the small cottage beside her, which also belonged to Jasmine now, but she expected some crotchety old man. “Thanks. I need to get my baby inside. If you could check on the heat that would be great.”

He nodded, pushing the door open for her to enter. The chilly air that met her as she stepped inside caused her to frown.

“Shit,” he mumbled, as he headed to check the furnace.

Kicking the door shut, she hoped the lack of heat wasn’t a foretelling that something was wrong with the furnace.

Jasmine left Alyssa in her car seat until she could get the crib from the car and set it up. Grabbing another blanket from the diaper bag, she wrapped it around her daughter before glancing around the large living room. People said you could learn a lot from the belongings a person owned, but she couldn’t tell much about the woman that was supposed to be her grandmother because the furniture was covered with white sheets to keep the dust off them while no one lived here. She had a lot of work to do over the next few days to get this place livable.

A faint memory of many afternoons playing in this room scattered past her thoughts. A rocking horse sat next to the fireplace where she would rock for hours on end while her grandmother crocheted. It seemed so long ago, and up until that moment, Jasmine wasn’t even sure she had lived here. She was so young when they left.

Her thin sweater was nothing against the cold air in the house. Rubbing her hands down her arms for warmth, she thought about how much her life had change in just a few short days. She went from living in a small studio apartment, barely making ends meet, to moving across country to a large, two-story home. Jasmine needed a change, one that would make a better life for her and her daughter. Moving to Clearwater provided her with everything she needed—a home, money her grandmother left, and an income from Logan who rented the cottage.

She caught a glimpse of her reflection in the window. The dark circles under her eyes showed her exhaustion from the long drive, and Alyssa’s constant fussing. Her hair was a mess and her makeup faded long ago. What a way to meet the tenant next door.

A picture hanging above the fireplace caught her attention. Stepping closer to see it better, she saw her mother with a baby in her arms. It had to have been taken shortly after Jasmine was born. What happened between her mother and grandmother all those years ago? She would need to go through her grandmother’s letters to learn more about their relationship.

Pushing aside the mysteries that lay in her past, she turned to find Logan standing in the doorway. “Oh?”

“Deader than a doornail. Jasmine, the furnace isn’t working. You can’t stay here, not with a baby and all.”

If it’s not one thing it’s another. Would this roller coaster ride ever end? She sighed. “Don’t worry. I’ll call someone in the morning. I’ll make a fire. Alyssa and I can camp here in the living room. We’ll tough it out tonight.”

He shook his head. “This house is way too cold, and I’m afraid you won’t get anyone out here for a few days, at the least. There’s a major snowstorm arriving tonight. It’s expected to drop three to four feet of snow over the next two days.”

“I’ll drive back into town then. I think I saw a motel.” The thought of driving again exhausted her already tired body, but what choice did she have?

She frowned. “Well, it’s obvious I can’t stay here, not with a baby and a dog. The furnace isn’t working, and I’m not sleeping in the car. I have to head back into town.”

“You won’t make it. Look outside.” He pointed to the large front window. “The snow is coming down pretty hard now. Besides, Winterbloom Bed and Breakfast is the only place in town, and it’s full. With the ski resort in full swing, there’s not a room available for at least fifty miles.”

She crossed her arms over her chest, trying to retain as much warmth as she could, as well as control her anger. It wasn’t Logan she was angry with, it was life in general. It was always an uphill battle, nothing could ever be simple. “Well, I don’t see any other alternative.”

He stepped closer. “Look, Jasmine. I’ve known your grandmother all my life. I’m harmless, I promise. If I let you and your little family head out in a storm at this time of night, I’m pretty sure your grandmother would return long enough to tan my hide. I insist, and I have the room.”

What was she supposed to say? He was right. She couldn’t stay here with no heat. The storm was getting worse, and her SUV didn’t have winter tires. It made sense to stay with Logan. Her grandmother obvious trusted him, to allow him to rent the cottage beside her, and he seemed to know his way around this place. “Okay, if you’re sure we’re not putting you out.”

Jasmine Pierce rocked her six-month old daughter in her arms while she waited in the hotel lobby for the attorney. Her mind raced, trying to understand why Dave Johnson, an attorney from Wyoming, had traveled to Virginia to meet with her. It probably had something to do with her ex, who went missing months ago, but that situation was over. She wasn’t going to bail him out—never again.

The lobby was near empty at this time of day, which she was glad of. Everyone had finished breakfast and gone on with their day. The owners’ two kids were waiting for the school bus outside, leaving no one close enough to overhear whatever shame her ex had gotten himself into this time and expected her to bail him out of.

“You must be Mrs. Pierce.” A man approached her and held out his hand. She accepted his hand, giving him a halfhearted handshake. “I’m Dave Johnson, we spoke on the phone. I appreciate you taking the time to see me. Let’s have a seat.” He led the way into a little nook the hotel offered, with a small sofa, two chairs, and a fireplace, giving it a homey feel.

Jasmine sank onto the comfiest chair the room had to offer, which wasn’t saying much. It was stiff and had a straight back. She turned her attention to the man before her, wanting to get this meeting over with before Alyssa stirred. “Please, call me Jasmine.” She hadn’t been Mrs. Pierce since the divorce, but she didn’t want to get into that conversation with a man she just met. “I don’t understand why you requested to see me. What do you want?” She prayed it had nothing to do with her ex. She wanted to move on with her life and to provide a loving home for her daughter.

“I’ve come from Wyoming searching for you. I’ve been your grandmother’s attorney for years. She passed away in September, but asked me to find you a few months prior. I had a difficult time locating you since your mother changed your last name and then you married.”

She leaned against the hard back of the chair, taking a deep breath to steady her nerves. Grandmother? Her mother had always said she had no family left and that her own mother had died years before Jasmine was born. “I’m sorry, but you have the wrong person.”

He scooted to the edge of the stiff brown couch. “Let me explain.” When she nodded he continued. “Your mother ran off with you when you were very young. She sent pictures to your grandmother, but wouldn’t allow her to see you. They, your grandmother and mother, had a difference of opinion that led to an estrangement.” Mr. Johnson leaned down to pull a stack of envelopes, tied with a red ribbon, from his briefcase. “These are letters she wrote to your mother. They were returned unopened. Your grandmother said they explained the distance between her and your mother. She tried for years to make things right, but your mother refused her letters and calls. But that’s not why I’m here. I came to give you the deed to her house. When she passed, your grandmother left everything to you.”