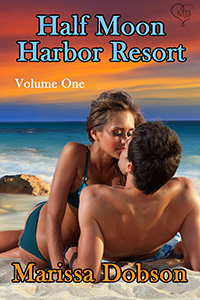 Can Meg and Jay save each other or are they destined to live half a life?

Learning What Love Is

Jacey Wilder is always watching over her shoulder, worried her abusive ex will find her. Terrifyingly, her natural strength as a lioness shifter proves no match against him. When her brother suggests a vacation to Half Moon Harbor Resort—a resort that caters to the paranormal—she leaps at the chance to get away.

Self-defense expert Blake Blackwell’s lion paced within him demanding they claim their newly discovered mate. The last self-defense class he had to teach at the Half Moon Harbor Resort was all that stood in his way. Or did it?

Can Jacey accept Blake as her destined mate or will her ex destroy her potential happiness? Blake lost one woman he loved but he’ll be damned if he loses Jacey.

A life threatening attack woke Jackie Wilder up. Tired of waiting, her lioness is determined to convince her mate to claim her.

Haunted by his past, Kevin Roberts doesn’t dare allow anyone close, not even the woman he knows is his mate. Years spent as a lab experiment left their scars on his body. But when a lioness hunts, his desire may be their undoing.

Can Jackie help him shed the shackles of his past? Or will his scars rend them apart?