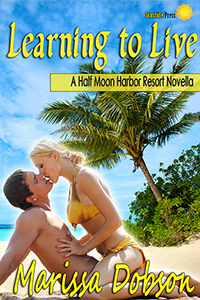 Half Moon Harbor Resort Book One

Can Meg and Jay save each other or are they destined to live half a life?

“Damnit, Meg. What’s going on? I can feel your pain. It’s slicing through me.” She could see the hurt in his eyes.

“I…umm….can’t explain.” A tear ran down her check. She didn’t know what to say to him.

“You can, and you will. Come on, Sugar. Tell me.” He wiped her tears away. “Nothing can be as bad as you think it is.”

“I’m a freak,” she whispered, her voice tight with tears.

“Why do you think that?”

Throwing caution to the wind, she blurted out, “Because I can see guardian angels. They want my help to lead people on the right road to happiness.”

She tried to pull away from him, wanting to leave, but he held her tight. “That doesn’t make you a freak. That makes you special.”

Standing on the ferry, Meg’s body sagged with exhaustion, a vacation was just what she needed. Renting a small cabin at the Half Moon Harbor Resort was just what she needed to get over this funk. From what she had heard, the Half Moon Harbor was the perfect place to forget about your troubles and find peace within yourself. The best part was there was no cell phone service. She planned to spend the week putting her life back together. She wanted to spend much of the time alone because she had things she needed to figure out.

She didn’t tell anyone where she was going; she only told her family and close friends that she needed time to herself and that she would be unreachable for a week. As expected, they put up a fuss, demanding she tell them where she was going and what she was planning. She stood firm, not giving in to their demands. She didn’t need one of her overprotective brothers following her.

As the ferry passed the half-way point, her cell phone beeped, letting her know she lost service. Relief flooded through her. Pulling her phone out of her pocket, she sighed with gratitude at the sight of no cell phone signal. She made it, she thought as she saw the resort coming into view. A whole week to herself; she wasn’t sure what she would do with it, but she knew she needed it, just as she knew she needed the air she breathed.

As the ferry docked, she let most of the other passengers depart first. She had no desire to get too close to people this week. Dinner was going to be the hardest time to avoid them since the Half Moon Harbor only served dinner for the guests in the dining room. She wondered if she would be able to handle her ability then, and what she would do if she couldn’t. She had never been around a large group at one time before. She tended to avoid situations like that at all cost.

Stepping off the ferry, she made her way to the reception area, wondering if she made the wrong decision by coming here. It was too late now; the ferry was already returning to the mainland, and wouldn’t come back for a week. Half Moon Harbor had the ferry come weekly unless there was an emergency.

The woman sitting behind the desk looked up from what she was doing as Meg approached. “Hello. You must be Meg Harper. I’m Kathy. Welcome to Half Moon Harbor Resort.”

Meg tried to ignore the motherly spirit that was hanging protectively by Kathy as she checked in. “Thank you. I have a cabin reserved.” She tried not to be rude, but she could barely stand. She just wanted to settle into her room and take a nap.

Kathy retrieved the key for the cabin, but instead of handing it to her, she held it when she noticed Meg was looking strangely behind her. “What are you looking at?”

She merely stared, tongue-tied for a moment. “Umm…Nothing…Sorry, I was just lost in thought,” she forced out. She bit her lip nervously. She was sure Kathy could tell she was lying, but what was she supposed to say? Oh nothing, just your guardian angel. People would think she was a nut. Whoever heard of someone seeing guardian angels before?

Kathy eyed her doubtfully. “You cabin is number three, it’s right out those doors and down the path. Dinner is served in the dining room at six o’clock. Enjoy your stay.”

Settling into the cabin, she wondered who Kathy’s guardian angel was. She always wanted answers to the questions that puzzled her, that’s what got her in trouble. That’s why she was here. She needed to figure out how to live with this ability, without letting it control her life. She was tired of living in isolation; she wanted to have a real life. Deep down, she wasn’t sure if a normal life was possible; her gift made living like a normal person extremely challenging. Could she find a way to control it, instead of it controlling her? That’s what she wanted to find out.

The cabin was stunning and the large fireplace made it feel homey. For a brief moment, she wished she had someone she could cuddle up by the fire with. She asked for their largest cabin, and this one had two bedrooms. She didn’t need the extra bedroom, but she wanted the space.

The cabin had a small kitchen, guests didn’t need much since dinner was served in the dining room and there was room service. The rest of the open floor was for the living room and a small workout area off to the side.

She placed her suitcase in the master bedroom before returning to the living room with the bottle of wine she had brought with her. Before bed, she liked to have a glass of wine to help take the edge off the day. Seeing guardian angels tended to put an added stress onto everyday living, especially trying to hide the fact from others. She placed the bottle in the door of the refrigerator as someone knocked on the cabin door.

On her stoop stood six figures, only three of them were solid. “I’m Sarah, an owner of Half Moon Harbor Resort. May we have a moment of your time?” Kathy was standing there with her head down, looking uneasy. There was also a man with them that she didn’t know. She assumed he was a guest, with his jeans and tee-shirt and a duffle bag slung over his shoulder.

She nodded and stepped out of the way, “Please come in.” What else could she do?

“Kathy informed me there has been a mistake in booking for this cabin this week. It seems as though the computer booked you and Mr. Wilder in the same cabin for the same week, without notifying us of the mistake until he tried to check in.”

“I’m not sure what you expect me to do about it. I’m already settled. Can’t you put him in another cabin or in one of the guest rooms?” This was not how she wanted her trip to start. It could be a disaster for the whole week.

“I’m afraid not. Every room and cabin is booked. You’re the only one with a two bedroom cabin.”

“Absolutely not! There is no way! I came here to get away from everything. I’m not sharing a cabin with someone I don’t even know.”

Sarah stood there silently for a moment, radiating calmness. “I understand, but there is nowhere else for him to stay.”

He had stood there letting the women speak, but he spoke up now, as if he knew that if he didn’t do something fast, they would be sending for the ferry. He cleared his throat. “Miss, I know this is an inconvenience, but it was an overlook by the staff. I won’t be in your way. I just need a place to sleep. Please.” He looked as drained as she felt.

She let out a puff of air that made the loose hair around her face flutter. “Fine. You can use the bedroom, but please do your best to stay out of my way.”

“Thank you,” he said as he set his bag down.

Sarah looked as though she knew it would work out. “Thank you, Ms. Harper. Whatever we can do to help you enjoy your stay, please don’t hesitate to let me or the staff know.”

“Thank you. I just want to be alone. I need a nap and a shower before dinner.”

“I understand,” she said as she motioned for Kathy to follow her to the door.

Kathy hesitated before she walked through the door. “Ms. Harper, I am truly sorry.”

When they were alone, the man closed the space between them. “I’m Jay Wilder. I know you aren’t thrilled with the situation, and I am sorry. I will do my best to stay out of your way and make your stay here as enjoyable as it should be.”

“Thank you. I’m Meg. I’m here to get away from it all. I needed space without people breathing down my neck.” She rubbed the pendent around her neck before she continued, as if it gave her the strength she needed. “You can have the bedroom on the left. I already have my things unpacked in the master. I’m going to take a nap before dinner.” She headed towards the master bedroom without waiting for a reply.

When she had the door closed, she rested her forehead against the door and whispered why me? All she wanted was a break. She didn’t need a roommate. She didn’t even have a roommate at home; dealing with someone around all the time was more than she could handle. Now she had to deal with a stranger sharing her cabin.

What was he? She wondered. His guardian angel was different. She knew vampires didn’t have guardian angels that followed them, so that ruled that out. Plus it was still daylight. She was at a loss as what it could be. Could he be a shifter?