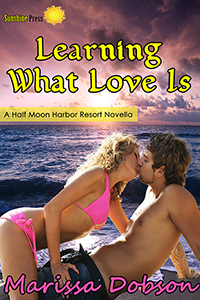 Jacey Wilder is always watching over her shoulder, worried her abusive ex will find her. Terrifyingly, her natural strength as a lioness shifter proves no match against him. When her brother suggests a vacation to Half Moon Harbor—a resort that caters to the paranormal—she leaps at the chance to get away.

Self-defense expert Blake Blackwell’s lion paced within him demanding they claim their newly discovered mate. The last self-defense class he had to teach at the Half Moon Harbor Resort was all that stood in his way. Or did it?

Can Jacey accept Blake as her destined mate or will her ex destroy her potential happiness? Blake lost one woman he loved but he’ll be damned if he loses Jacey.

Jacey Wilder held the cell phone in a death grip. Anger had her animal crawling to the surface. She kicked herself for her stupidity over Gray. Would she never learn? Why was she so set on changing him, when it was obvious he didn’t want to—and would never change?

The family fixer, she solved her family’s problems. Gray, a true bad boy on the wrong path, allured her with his overwhelming issues in need of the “right” woman to make it better. The man took everyone for granted, and she wanted to help him turn his life around. Falling for him hadn’t been in the cards.

“Jacey, it’s about time you gave up on that dirtbag,” Jackie said from where she relaxed on the porch swing.

“Were you listening in on my phone call again?” She eyed her twin with suspicion.

“I couldn’t help it, your anger was so strong I could feel it out here. I wanted to know what happened this time.” Jackie moved her legs to give Jacey room to sit down. “Are you really done this time? Before you get all defensive, I’m just asking because we’ve heard this before.”

“Yes, Jackie. I am done. It’s time for me to move on,” The tears in her voice angered her. She was tired of being used by Gray, yet her emotions were out of control when it came to him. A car door closed and she looked away from her sister.

Oh, Blake. The glimpse of her sexy new neighbor, his scent called to her inner lioness, and made both stand up and take notice. The sight of him was one of the perks of her day. Blake Blackwell was one of the few in their town who wasn’t a part of the Wilder family or somehow related. Blake’s grandmother had remarried a distant cousin of a Wilder mate. When she died, he’d inherited her house and bookstore.

Jackie scooted closer and put her arm around Jacey “I know it’s not easy but you deserve better. What I’m about to say next is because I love you, so please remember that when you want to strangle me.”

“What is it?” she prodded when her sister paused.

“Here it goes…Jay and his new bride, Meg, will be here shortly.”

“I can’t believe you waited until now to tell me. You know Jay’s going to flip if he sees me upset over Gray again.” She rushed into the house to repair her makeup. Her stomach had butterflies at the thought of Jay and Meg finally being back home. Jay had been away for too long, it would be nice to have him back among the Wilder Pride.

In the downstairs bathroom, she took a washrag to the mascara running down her cheeks. Jackie yelled “They’re here,” and her time was up. She tossed the rag in the sink, and then she looked in the mirror. A quick fluff of her blonde, curly hair would have to do. She didn’t have time to redo her makeup.

Her puffy, red-rimmed eyes made her crying apparent. “Hopefully Meg has tamed the lion,” she told her reflection and went to greet her brother and new sister-in-law.

Jay, their once lost brother, waited with Jackie and his mate on the porch. After his vampire attack, he hadn’t been the same. Since taking over command of the Wilder Pride, her brother was always tense. In the last few months, the situation worsened. He was quicker to anger, his temper always boiling slightly under the surface. Thankfully, his new mate restored the spark in Jay’s eyes. Meg was one of the few in Wilderville who wasn’t a lion shifter, but Jackie knew she would fit in. Her ability to see a person’s guardian angels made it difficult to live a normal life. Around shifters she would find the peace she craved, since they didn’t have guardian angels demanding her help like the average human.

“There’s my other favorite sister. Nice of you to be here to welcome me home,” he teased. “Jacey, come meet Meg, my beautiful mate and wife.” Her brother jumped off the porch to dig their luggage out of the trunk.

Meg’s nerves mingled with Jacey’s anger, making her giddy and on edge. “Welcome to the family.” Jacey gave her a hug and leapt down to follow him.

Jay grabbed the last suitcase out of the trunk before turning towards Jacey. “Meg, Jacey’s going to help me take the bags to the house, I’ll be back in a minute.” He nodded his head towards the direction of his house across the street. “Then we’ll all go out for dinner and catch up.”

Shit. Impossible to hide things from him, I should have snuck out the back door. Left with no choice she picked up the smaller bag from the pavement, and followed him across the street. Delaying would put off the inevitable.

Shifters possessed the uncanny ability to feel the emotions of others, especially those closest to them. Jay as the alpha of Wilderville had honed his ability to seek out traitors amongst his people. He dropped the suitcases by the foot of the stairs and rounded on her. “What’s going on? Spill it and don’t tell me nothing I can feel the turmoil. Is it Gray again?”

Suddenly the bag weighed a hundred pounds. She opened her fingers and it fell to the floor. Tugging at her sweater, she wished she could wrap herself in it and disappear as she did when they were cubs. For years Jay had been there with her through thick and thin. It wasn’t until he saw the bruises that he pushed for her to leave Gray.

“It’s nothing. I’m just tired.” She tried to diffuse his concern.

“Don’t give me that bullshit. I know you better than that Jacey. The only thing you get this upset about is Gray. I thought you weren’t seeing him anymore.”

She plopped down on the steps. She fiddled with a loose string on her red sweater unable to make eye contact. “I haven’t seen him since before you left.”

When she didn’t continue, he knelt in front of her. “Jacey, tell me what’s going on. Either you’re lying or…”

“No matter how many times I tell him that it’s over, he calls me daily. He won’t come here because he knows Chase or one of the others will kill him on your orders. But he stopped by work so much that I got fired. I’m scared to leave Wilderville, but staying here with him calling me constantly I can’t get over him. I don’t know what to do.” The dam burst and she poured out her pain and anger. She twirled the string around her fingers unable to look her brother in the eye. These were the times Jay was just her brother not her alpha. She wanted his support, and guidance without the pride knowing. But as alpha Jay would bring in the Wilderville guards to deal with the situation.

Jay placed his hand on hers. “I’ll deal with him. We will go to the police if we have to. This harassment needs to end, you should have told me before.”

“You were away at Half Moon Harbor, then your honeymoon. There hasn’t been time, plus I was trying to deal with him myself. I thought I was handling it, at least the best I could. Without work, I barely leave Wilderville. I did my best to avoid his calls, but today he caught me.”

“We’ll take care of it.” He repeated firmly. “Maybe a break from around here would be good for you. Half Moon Harbor has excellent security; they also cater to our kind. We could arrange for you to have a private cabin there. It would give you the time you need to get your emotions in order, and time to heal. There’s no cell phone service so he won’t be able to contact you.”

She nodded maybe it was just what she needed. She could get to know Meg when she returned. A few days not having to dodge the phone, or being cramped in her house sounded like heaven. I pushed Jay to go to Half Moon Harbor Resort. It helped him. Jay always wanted to protect us, now I’m giving him the chance and he’s jumping at it. She embraced his offer with open arms, dying to get away from Wilderville. After all, she was the one who found Half Moon Harbor Resorts for Jay when she thought he needed a break.