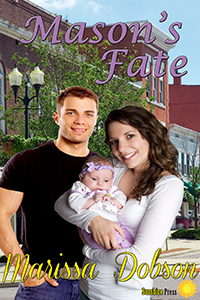 Still recovering from his last mission in Afghanistan, Mason Andrews has returned home to civilian life with a heavy heart and blood on his hands. Though he’d rather lock himself away and heal on his own, his family has a different idea—bringing him out of his comfort zone and into a place where healing is his only option. But when he finally gives in, he finds that there’s more for him than just his thoughts and pain—there’s her.

After breaking down on a deserted road with her sick infant, Tiffany Tyler is at her wit’s end. All she wants is to be back in the comfort of her own home, away from judging eyes. Mason, whose eyes hold more pain and memories than she thought possible, steps out of the shadows to her rescue.

Can Mason and Tiffany accept each other’s baggage and embrace the fate that they are destined for?

Mason Andrews stepped out of the taxi in from of his brother, Damon’s house, taking in his surroundings. The red, yellow and gold leaves cluttered the ground, leaving no doubt that fall was coming to an end. The first snowfall wouldn’t be long now, bringing the blast of winter to the sleepy town.

It’s good to be home. I didn’t realize how much I missed it. He rubbed his injured shoulder. They might have removed the bullet, but it still pained him. Doctors said he’d never regain complete mobility in his arm, leaving the Marines no choice but to honorably discharge him. It was only a month since the accident and already he missed the adrenaline and action the Marines brought him.

The doctors were wrong. They weren’t aware of his healing ability. As a mountain lion shifter, wounds that would be life-threatening to a human would heal. Still it would take time, and once the healing was complete he had no way of explaining it to his commanding officers. It would bring up questions he was unable to answer. He wouldn’t expose his people just to maintain his career.

The military was all he’d known since graduating high school, so adjusting wouldn’t be easy. With determination, he grabbed his olive green military duffle bag, ready to face his brother.

Before he made it to the porch, the front door swung open, and a woman stepped out. She wore a loose cream sweater over black leggings, and her long brown hair hung free on her shoulders.

“Mason? Is that you? Damon and Josh were going to pick you up at the airport tonight.”

He nodded. “You must be Aspyn. I caught an earlier flight. I told them before I’d get a taxi, but they didn’t listen. Since I was early, I did just that. No use waiting around the airport for them. Is Damon home?”

“Come in. Sarah’s inside. Damon and Josh are meeting with a potential client in town but should be back shortly.”

He couldn’t leave the woman standing in the cold even if he’d prefer to wait for Damon on the porch. Surrounded by women wasn’t how he wanted to spend the afternoon.

“Come on, Mason. We don’t bite. After all, in just two weeks’ time we’ll be family.”

The reminder of that made his blood run cold. In two weeks there was to be a double wedding for Damon and Aspyn and Josh and Sarah, with him as the best man. The women said there was no reason to gather the family twice, and from what he heard, his brothers fell in line with what they wanted. He had a feeling if they asked for the moon, his brothers would do their best to see they got it.

Aspyn had the date set and was in the process of making arrangements when Sarah agreed to marry Josh. Minor changes allowed both women to have the wedding of their dreams, or so he was told.

Inside he found Sarah, clinging to a glass as if it were her lifeline. She sat bent over, her chest touching her knees and her face pale. “Mason, your other future sister-in-law Sarah.”

“It’s a pleasure to meet you finally. Josh talks highly of you. Please forgive my appearance….” She set the glass aside and ran from the room.

“Is she okay?” Mason tossed his duffle bag aside.

“Forgive her. It’s morning sickness. Have a seat. I’m going to text Damon to let the guys know you arrived. Can I get you something to drink?” Aspyn grabbed her cell phone from the coffee table.

“No thanks.” Taking in the room, he was in awe of the work Damon did to make this place beautiful. From the hand-carved railing on the stairs in the entryway, to the woodwork around the fireplace, everything had such detail. In the years he was away, Damon had become a talent to reckon with.

“Hey, bro. I hope our women didn’t bore you with wedding details or try to scare you off children with their pregnancy pains.” Damon stormed into the room, tossing his jacket on the back of the couch.

“No.” He smiled for the first time since the accident. It was surprising how easy it was around his brothers. They lifted his spirits in a way nothing else could, without even trying. “Aspyn got an emergency call from the caterer and went into your office a little bit ago, and poor Sarah’s spent more time in the bathroom than with me. Are you sure she is all right? Maybe Josh should take her to the hospital. I offered, but she told me it was part of being pregnant.”

“She’s fine. The doc says it will only last the first trimester. Josh went to check on her.”

“If it’s so normal, why isn’t Aspyn dealing with it? Man, why didn’t you tell me she was expecting too?”

“Different women, different pregnancy symptoms. I didn’t tell you because she wanted to keep it hush. Aspyn was concerned how Sarah would handle it, but the worries were eliminated when Sarah got pregnant too.”

“What?” He knotted his eyebrows together in confusion. “Why would she worry about that? Women get pregnant all the time.”

Damon dropped into the chair, remote in hand, flicking on sports news as Josh wandered into the room.

“Sarah’s world got turned upside down before moving here. Her parents died, she broke up with her boyfriend of many years— it was a bad time. She was considering single parenthood with a sperm donor when Josh came along.”

“I’d appreciate it if you didn’t mention it. She’s finally settling down, and Aspyn says returning to her old self. Well when she isn’t….” Josh raised his eyebrows, tilting his head toward the bathroom.

“I hardly think it will come up, Josh,” he ragged his brother. “I go away for a little while and you both not only get engaged but you knock the women up. Talk about smooth movers. Gram would say that should have waited until the wedding night.”

“Yeah, that old woman is probably rolling in her grave. She’d have busted our chops for it. But it’s a different time than when Gram was raised.” Josh sank into the corner of the sectional sofa on the opposite end of where Mason sat. “Enough about us. What are you going to do now that you’re out of the Marines?

The dreaded question. What now? He had been asking himself that same question since the accident. I’m a Marine. That’s what I’m. I don’t know how to do anything else. His whole life revolved around the Marines. Two weeks after he graduated from high school, he was on the bus to boot camp, rarely returning home except once or twice a year on leave.

The minutes ticked by as he worked on an answer. To come up with an answer now, when he had been pondering it for weeks, was as likely as asking for rain on a cloudless day.

“I’m unsure. Coming back to civilian life was unexpected. I’ll get a room at Daisy’s Inn, until I find a place of my own.” Unable to meet their gazes, he stared out the sliding glass door. He didn’t want their sympathy—all he wanted things to be the way they were. A gust of wind blew more leaves from the branches, bringing home fast that things would never be the same. Life moved on, just as the seasons changed. There was no use living in the past. As the trees braced for winter, he must do the same and face the challenges that were in store for him.