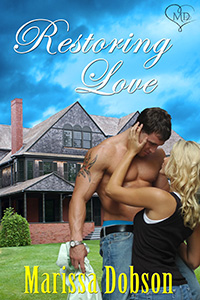 When Danielle Bradworth inherits a house from an Aunt she barely knew, her life is changed forever. Family secrets and a threatening potential buyer for a house she doesn’t want to sell could equal disaster for Danielle.

A handy man living in the groundkeeper’s cottage could do more than restore the house to its former glory. He could also restore her heart … but will she let him?

Lost in her memories, she didn’t hear or sense Mason come up behind her until he reached around the front of her and rolled the paint roller up her shirt.

“What the…” she hollered, jumping back into him.

He wrapped his arms around her so she wouldn’t fall. “I told you, just you wait and see,” he whispered against her cheek.

She twisted her head to look up at him. She wasn’t sure what she would have said, but before she could say anything, he kissed her. The unsaid words died on her tongue. His kiss was full of heat and need. Oh, finally…

She turned in his arms, meeting his kisses with her own desire. The paint roller dropped to the floor, but neither cared. They were lost in the heat of each other. Until the doorbell rang…

Twelve hours after leaving Indiana, Danielle Bradworth pulled into the driveway of her new home. She used the term home in a very loose way. After all, this is Sharpsburg, Delaware . . . the middle of nowhere.

“This place should have been condemned years ago,” she said, getting out of the car.

An old, Victorian house loomed in front of her. What was I thinking? Her lawyer had advised it would be best to just sell the mansion as is, but she could see potential in the house. She couldn’t let it fall into the wrong hands, especially not the hands of James Worth, who wanted to tear it down and build a spa.

Her gaze was riveted on the place. It was in a state of disrepair, but still, she saw what the house could be, the charm it had. In her mind, she visualized what it must have been like years ago. She would do her best to restore it to its glory. There had to be eight to ten bedrooms inside the house alone, not counting the other rooms. The three stories were going to be a lot of work.

“It’s beautiful, isn’t it?” came a voice from behind her.

“I’m not sure ‘beautiful’ describes it in this state, but it will be when I’m done.” She looked away from the house for the first time since arriving, to find a man standing beside her. His skin was a dark tan, which only hours in the hot sun could accomplish, and his brown hair had natural sun-kissed streaks running through it. She would bet money he worked outside. “Who are you?”

“Mason Cole. I’ve been renting the groundkeeper’s cottage from your aunt.”

She remembered her lawyer mentioning something about a tenant in the cottage, but she’d figured it would be an old, grouchy man. She never expected a man like Mason. He was gorgeous, and he couldn’t have been older than thirty. She felt instantly drawn to him. What was a man like this doing living in a groundkeeper’s cottage? Shouldn’t he be married with two kids?

Temporarily rendered speechless, Danielle finally found her voice again. “That’s right. The lawyer did mention that. I didn’t expect you to be up here at the house.”

He nodded. “I saw you pull in. I decided to come up and introduce myself. Also, I thought I should prepare you. Mr. Worth was here today. He wanted to catch you before you settled in, but since you weren’t here, he said he would be back tomorrow afternoon.”

Danielle rolled her eyes. “Does that man never give up?” The question was aimed more at herself than Mason. She’d had just about enough of Mr. Worth.

“I see he’s made his intentions known.”

“Oh, yes, on more than one occasion.” She walked around her car to the trunk with the intention of grabbing her suitcases.

“Sounds like James. But once you see the inside, you won’t regret your decision about not selling.”

“What is that supposed to mean?” she asked, eyeing him uncertainly.

“Let me help you inside with your luggage and you’ll see.” He grabbed the two larger bags from the trunk, leaving her with a small duffle and her laptop case.

As she followed Mason up the porch steps, she made a mental checklist of things that needed doing. The shingles were barely hanging on. Weeds grew rampant around untrimmed hedges. The paint on the porch was peeling layer-by-layer. The list went on and on. She would have to start with the most important things first and proceed from there. There were no doubt things inside that had to be done to make the place livable as well.

Mason held the screen open as she slid the key into the hole of the main door. The unlocking click was audible, but the door wouldn’t budge.

“Here, let me.” He put his shoulder to the door, and it swung open. “A little oil on the hinges and it will be as good as new.” He flicked the light switch by the entrance, and the foyer and living room to the left lit up.

Danielle couldn’t speak. The inside was beautiful. The large, curved staircase dominated the foyer, and the overhead chandelier sparkled. Except for a thin layer of dust from sitting closed up for two weeks, the house was spotless.

“The outside?” he continued without waiting for her to respond, “Wilma didn’t want people to come around. She acted like a cranky, old woman who didn’t care anymore, when in fact, she was a lovely woman. Not wanting to sell the house any more than you did, she let it appear as though she didn’t care about the house any longer. It would get James off her back. It’s been in your family longer than anyone can remember. This house meant everything to her.”

Danielle didn’t know what to say. She’d never expected this. From the pictures, she had expected to sink every last dime to her name into this place. Now to find out it only needed some outside work and maybe a few upgrades throughout, she was excited to get her hands dirty. This was more than she could have hoped for.

She moved on to explore the living room, running her hand on the mantle above the large fireplace. She’d always desired a fireplace. Her mind played over the changes she wanted to make in this room: showcase the hearth, rearrange some of the furniture, and add a bookcase for her books in the car. A new coat of paint and some minor changes would make it the perfect place to relax, especially on stormy nights.

“Oh, sorry,” she said when she caught Mason watching her from the doorway.

“No, I’m the one who should be sorry. I couldn’t help but watch you. Outside, your face was full of despair and ‘oh shit,’ but in here I can see the ideas turning in your head. You’ll make this house a home.”

Mason had departed hours before, and still, Danielle roamed the house. This time with a pen and pad in hand, making notes for each room. She wanted to paint almost every one as well as rearrange the furniture and replace some pieces with items that suited her style.

After finishing her notes on the downstairs rooms, she wandered onto the back deck. The roses around the porch were the only part well-maintained. Once the weeds are picked, the shrubs trimmed back, and the yard is tidied up, this could be a garden in Home and Gardens. The creek ran along the back of the property, giving a serene feel to the area.

She stood on the deck, looking over the lawn, as the sun sank low in the sky. The back yard would be the envy of most. It was huge. Even with a large in-ground pool, there was still plenty of room. Behind the house, there had to be half an acre of land. The trees would keep most of the yard shady during the hottest times of the day.

The night was still early, but it had been a long drive. She was too tired to explore the rest of the house. She’d already done a walkthrough of the second story when Mason was present, and her suitcases waited for her in the bedroom of her choice.

Danielle laid the pad on the kitchen table as she walked back through the downstairs. The kitchen was going to be the biggest project inside the house. It needed to be modernized, but she wanted to keep some of the charm. Tomorrow after she went to town for paint, she would decide how she wished to proceed.

The curved staircase in the foyer was one of her favorite features. Made of hand-carved wood, it was unlike anything still produced. As she climbed the stairs, Danielle ran her hand along the banister. What sort of person must have climbed these stairs years ago? Maybe Aunt Wilma left photo albums somewhere. I wonder if there are pictures of her . . . . Did she touch this bannister? Did she sit on it and slide down as children are wont to do? She vowed to search for answers amid all the boxes of mementoes, as soon as she had time.

When she reached the bedroom she’d designated as her own, she stood in the doorway admiring it. A large, four-poster king-sized bed dominated the room, but its satin royal purple comforter drew the eye. Purple, white, and gold throw pillows decorated it, giving one pause. It was almost too inviting. It appeared so immaculate Danielle was hesitant to mess it up.

The room fit her perfectly, as purple was her favorite color. Even without the bed, she would have chosen this room for the walk-out deck. She imagined herself spending hours out there working on her laptop or reading a good book. There was very little she wanted to amend in this room. New curtains, change of knickknacks and pictures, removal of her aunt’s things from the closet and dresser, and the room would feel like home.

Tomorrow. Exhausted from the day’s excitement, its revelations, and the plans for her future, she slipped out of her clothes and messed up the perfect bed by crawling under the purple covers.