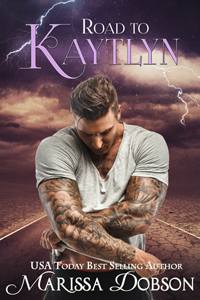 It takes a kidnapping to bring two separated lovers together,
but can they survive the journey through Hell?

After spending three years in prison, Jax Easton has two things on his mind: the woman he left behind and revenge. He never expected a kidnapping would bring them back together and put them on the same path—a path to a freedom.

Kaytlyn Esposito has lived under her father’s thumb all her life, playing the dutiful daughter and pawn more times than she can remember. But when he sells her to save himself that’s where she draws the line. It’s time to remove his hold on her and to move on with her life.

Torn apart by Jax’s need to save her, can they come together again and find something that makes everything worth fighting for? Their journey through Hell will be hot but love must find a way to prevail.

Metal clicked as the key in the door turned, unlocking. Taking a deep breath, she watched as the door inched open, and prepared to make her move. Thrusting herself forward, bringing the hanger straight toward where she estimated Pedro’s face should be, she fought against the blood rushing in her ears to hear if Jorge was coming. Fingers wrapped around her wrists as she brought up her knee.

“Tesoro, don’t even.” Still he turned, giving her his hip and denying access to his crotch.

Her knee brushed against his hip barely making contact as her eyes grew wide. The voice turned her mouth dry while stealing the air from her lungs. Only one person used that nickname. Tesoro. It can’t be. The face was different, so different, and so familiar all at once. Yet it couldn’t be. Her mind had to be playing tricks on her as she fought to handle the terror of what was coming.

“Tesoro.” The softness of his voice had her glancing up at him. Even as she took him in, she expected reality to sink back in and find herself looking at Pedro instead.

“You can’t be here. This isn’t real.” Shifting her wrist and forcing the tight ropes to dig into her sensitive flesh she pinched the back of her hand, half expecting to wake up from the daydream and find herself still in the closet, or worse, standing in front of Pedro. “I’m hallucinating.”

“Shh Tesoro, they’ll hear you.” Cool metal brushed along the inside of her palm seconds before the rope dropped away. “Let’s get you out of here.”

“You can’t be here.” She reached out and touched the curve of his cheek. Feeling the cool skin under her touch she pulled back. Hallucinations aren’t something you can touch, they weren’t real, yet she felt him as if he was standing before her. “You’re dead.”

“I’m very much alive.” Taking hold of her wrist he brought her hand to rest over his heart, as if feeling the beating beneath her fingers would somehow convince her all this was real.

“He said you were dead.” She glanced past him, looking around the room, looking for her purse. “Where’s my purse? I have your obituary.”

The wintery night was made worse by the winds coming off Lake Erie, sending freshly fallen snow through the air and a chill straight through Kaytlyn. This wasn’t where she was supposed to be, dressed in nothing more than a little black dress and rope bidding digging into her wrists. She was supposed to be miles away in Detroit stuck in yet another so-called business event, trying to play her part as the dutiful daughter.

Dutiful daughter, that’s what got me into this. A fresh wave of anger rushed through her giving her the strength to stand a little straighter. She wasn’t some naïve school girl, she could find a way out of this if she kept her head.

“Ahh, there she is.” A heavyset man looked her over before nodding to the man beside her, still gripping her arm.

Unlike the man holding her, this man’s English was nearly perfect, only a trace of his accent lingered. Though she suspected he worked harder to blend in. In his line of work, little things such as a strong Mexican accent would have marked him in someone’s memory. Things like that could link them back to a crime.

“You did well, Jorge.” He spoke again pulling her from her thoughts. “Not a scratch on her. She’ll fetch a good price.”

“You have no idea the hell you’ve brought upon you and your men.” Refusing to back down she met his gaze. “When my father finds out—”

“Jorge told me you’re quite the handful, but he didn’t tell me you were senseless.” He shook his head. “Your father knows. Who do you think offered you up on a serving platter to us? He even took care of your bodyguard so we didn’t have to bother with him.”

“He would and he did, but believe whatever you must to get through the days ahead of you. The longer you keep your spark the longer you’ll stay alive. We enjoy when it takes longer to break a woman’s spirit.” His smirk sent chills along her spine still she kept her gaze locked on him. “I’m Pedro, we met briefly years ago, but I doubt you remember me.”

“I couldn’t forget a pig like you.” The words barely left her lips before his backhand met her skin. Blood formed in her mouth, but she wouldn’t give him the satisfaction of knowing he’d hurt her.

Play it smart and you can survive. Let your smart comments get the best of you and it will only lead to pain. Jax’s words flashed through her thoughts until the embers of rage burned brighter.

“Take her inside. She’s worth nothing to me if she catches her death.” He stepped aside on the deck giving them a straight shot into the house behind him. “Place her in the cell in my room. I think I’ll have some fun with her before she’s up on the block.”

Even as comments rolled through her thoughts, she forced herself to keep her mouth shut. Be smart, think this through, take into account every exit, every weapon you can use, and every threat. Jax’s words haunted her again but she couldn’t let anger from another situation seep into this. A mistake like that could be deadly and Jax wasn’t worth it. Not after all this time. Not after all he did to her, to her family.