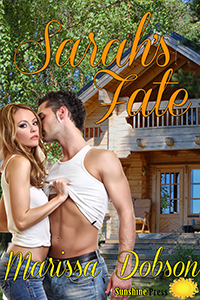 Sarah McMillan’s life came crashing down when her parents died. Moving across country, she’s determined to pull the pieces together and get on with her life. But when a man steps into her path, all her plans may have been for nothing.

Josh Andrews spent years searching for his mate, only to find her when he least expects it. Fate brings him Sarah, someone who needs him more than he’d thought he’d needed her. But convincing her to be his mate and start a new life might be harder than the journey to find her.

Can Josh convince Sarah to let him in? Or will the fact he is a mountain lion destroy what they could have had?

Letting out a deep breath, Sarah McMillan leaned against the car door. What was I thinking? she pondered to herself while taking in her surroundings. The quiet countryside was a complete change to the life she left back in California. The air was lighter and for the first time in her life, she heard honest-to-God, real birds chirping.

Six months ago, her best friend and roommate Aspyn Layton left California to attend to her dead father’s estate and never returned. A blizzard hit, leaving her stuck in her father’s cabin with a man she’d never met. That trip changed both of their lives forever. Now here Sarah was following her friend on this journey to the country.

“Sarah, you made it!” she heard Aspyn call. Turning away from the countryside, she saw her friend step out of the house. Love suited Aspyn. She had a glow about her, letting everyone know that she was in love. “It’s so good to see you. How was your trip?”

“Long,” she said, fighting to hide the yawn. As Aspyn strolled toward her, she ran a hand through her long, blonde hair trying to make herself presentable. Spending most of the last three days on the road, she hadn’t bothered to put on makeup or do much with her hair. She loved to make long trips comfortably, as her thin cotton lounge pants and tank top clearly stated.

“Come in. Damon and his brother are inside finishing a few last-minute things to make your stay comfortable. They’ll be done shortly. Until then, why don’t we have a glass of wine and catch up?”

“Damon! Josh! Sarah’s here.” Aspyn entered the cabin she inherited from her father. “Once the guys are done, they’ll get your stuff.”

She nodded as she took in the cabin. The large, stone fireplace off to the right dominated the living room. The cozy cabin had everything she needed, but most importantly the space to figure out what she wanted to do. She needed a change from California, but she wasn’t sure the country was for her. Maybe New York, Boston or even Pittsburgh.

“I know it’s not much,” Aspyn said as if she knew what Sarah was thinking. “Damon and I planned to remodel it, but when you agreed to come stay here for a while we did what we could to make it feel like a home for you.”

“I appreciate what you and Damon did and for allowing me to stay here. I really do like it. It’s just such a big change.” Her thoughts were going faster than she could keep up. Am I doing the right thing leaving behind everything I knew in California and moving here? Aspyn seemed so happy here. Could I find the peace that she has? My life is so mixed up now, I didn’t know what I want anymore.

“Oh, I remember that feeling all too well. Trust me, it won’t take long to adjust. A little peace and quiet is just what you need.”

She wanted to agree with her friend. After all, they’d known each other for so long that she hoped Aspyn knew what she needed, because she was lost. At one time, her life was on the right track…

Aspyn could read her like a book. “I can’t help it. I don’t understand. Everything changed so suddenly.”

“I know, sweetie.” Aspyn handed her a glass of wine. “But it’s better that you found out now.”

Her throat was tight with more unshed tears, and her voice refused to work. Better to find out now? Seven years in what she thought was a committed relationship, only to find he was a self-centered jerk.

She didn’t know what she would say; thankfully, she didn’t have to say anything. Two men came into the living room.

“There you guys are. Sarah, this is my fiancé Damon, and his older brother—”

“I’m Josh. I’m not only the older brother, but I’m also the wiser one. It’s a pleasure to meet you. I’ve heard a lot about you.” Josh offered her his hand, sending her a smile that made her weak in the knees.

“Same to you.” She took his large, calloused hand into hers, giving it a sturdy shake. Her gaze taking in the man before her. He stood at least six foot two, with a dark tan that only hours in the sun could give a person. His black mop of curls added a boyish look to his mature face, and his green eyes sparkled as they found hers.

“Sorry, I really must be going. I’ll see you tomorrow, Damon,” Josh said, heading for the door.

Aspyn slipped into Damon’s arms. “Hun, could you bring in her suitcases from the car?”

“Sure.” He kissed her forehead before heading out the door.

A smile lit her face as she watched Aspyn. It was good to see her friend happy and in love. She’d never had the love with Cain that Asypn had—it made part of her envy her friend.

Josh was worth this trip alone. The memory of his skin-kissed body was etched in her mind, bringing a quickening to her heart.