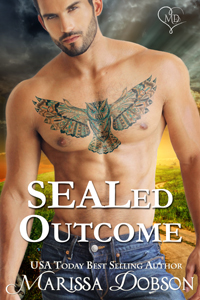 After sustaining injuries in the line of duty, Trever Alexander was forced to leave his SEAL team and all he worked for. In the midst of considering a job offer with Safety First Security, he was thrown into an assignment, one that brought him face to face with the woman he’d left behind.

One day Allyson Mason is living a normal, quiet life, and the next she is on the run. She doesn’t know who or what she’s running from. All she knows is if she wants to stay alive she must keep moving. She calls the only person she knows that might be able to help.

Chased by both physical and mental horrors, Trever and Allyson must put their emotions aside and work together.

*Originally titled SEALed in Texas and part of Cat Johnson’s Hot SEALs Kindle World. SEALed Outcome has now gone through rewrites to remove the Hot SEALs world, as well as add additional scenes to it. During the transition, I’ve changed SEALed Outcome to stand alone.

“The fuck you can’t.” He now stood near the window, his attention split between glancing at her and looking out the window. “You’re in danger here.”

“Don’t you think I realize that?” Her voice rose, which was better than giving in to the tears she wanted to shed. How had everything worked out like this? It was supposed to be a simple run to the store, then Anthony threw everything away and dragged her down with him.

“No, I don’t.” Trever turned back to look at her, his hand gesturing toward the door. “Otherwise you’d have been more careful. What the hell were you thinking, not even bothering to put the latch on the door? Are you hoping they catch you?”

“I…I…didn’t think…” she stammered, knowing she had messed up. If Trever had gotten in without her hearing a sound, anyone could have. Someone else could have been waiting for her when she exited the shower completely unaware.

“You’re right, you didn’t think, and you could have gotten yourself killed.”

He stood there unmoving as if she went through this type of shit all the time. She was out of her element and she knew it. It was why she’d called Ethan.

“You’re the fucking SEAL, not me,” she spat. “It’s not like I run for my life every other day. I don’t know what the hell I’m doing!” She sank down onto the bed again and stared at the floor. “Maybe I shouldn’t have run. If I’d stayed I—”

“You’d be dead,” He finished for her. He stepped away from the window and came around the bed to stand in front of her. “A drug deal? Damn it, Allie, are you hooked on that shit?”

“What?” She looked at him, blinking as she tried to adjust to the sudden swing in the conversation.

“If you’re messed up on that shit I need to know. I can’t have you strung out. In order to get you out of here I need you with a clear head.”

“I thought you knew me better than that, Trever. I don’t do drugs.” Tired of her emotions pulling her in two different directions she forced herself to look away from him and let her gaze fall onto the duffel bag that held everything she now owned, which wasn’t much. “Just get out. I don’t need your help.”

“You left me.” The words were out before she could stop them. That simple statement was the root of the newest turmoil inside her and was the one reason she was rejecting his help, though she hadn’t meant to verbalize it. She didn’t want him to know she still missed him.

“That’s not what this is about.”

Trever Alexander didn’t even work for Safety First Security—not yet anyway—yet there he stood in the sweltering Texas heat on assignment. He was supposed to be considering their job offer, not getting firsthand experience on what the job would entail. Instead, Lucas, the founder of Safety First Security, and Trever’s friend, Ethan, came to him with a situation which required someone with his unique skill set.

“Over and over in the field you somehow managed to get out of impossible situations. She needs that now. If there’s anyone that can get her out of Texas, it’s you. Your brother’s plane…it’s her only chance.”

Ethan pushed and said the right things to make him uneasy, and in the end, even though it felt like a setup, Trever now stood in Texas. Maybe it wasn’t a setup but a test instead. There was something that made him edgy about the way they brought him into this assignment. There were more than enough members of Safety First Security to handle the situation. They didn’t need him, especially before he had committed to their team. So why pick him for this task?

He dug his cell phone out of his pocket and leaned against the side of his rental truck. It was time to find out more about this woman he was supposed to rescue. Information had been scarce when he left, and that hadn’t sat well with him. Why send him across the country if they didn’t know who she was? He hit Ethan’s name and brought the phone to his ear.

“You there, Trever?” Ethan’s voice came through the phone’s speaker.

“I’m standing outside in the parking lot across from where you told me to be.” He scanned the motel looking for anything that might give him a clue as to who he was looking for. The migraine he was trying to fight off was only escalating from the horrible heat and the blazing sun overhead. “You going to tell me what the fuck I’m doing in Hell?”

“Hell…” Ethan let out a sharp laugh. “Texas heat is nothing like the sandbox.”

A flash of memories from his days in the sandbox flickered behind his eyelids until he ran his fingers over his eyes, pinching the bridge of his nose. “What the hell am I doing here? I left this state in my rear view a long time ago.” His voice was deep as he fought to remain focused instead of being dragged into the past.

“During the last contact we had with her, she mentioned she was staying at that motel, room twenty-three. Find her and get her out of Texas.”

“Who is she?” He was quickly growing tired of having to pull information from Ethan, and if this was how Safety First Security worked, he wasn’t sure he wanted to be involved. He didn’t like going into a situation without all the facts.

“Check your phone. Her information and picture are waiting for you.” With that, the line went dead.

“What the hell, Ethan!” There was something going on. This mission was too secretive. What was Ethan hiding? He pulled his phone away from his ear and pulled up his email. A few clicks later and he was staring at the reason Ethan had only dribbled out a little information at a time.

A picture of Allyson Mason filled his phone screen and his chest tightened. Her beautiful green eyes stared up at him, but the sparkle they once held was gone, leaving behind a hollowness. The smile stretched across her face appeared to be forced, and her shoulders were squared as if she was expecting something to happen. He knew she had once been determined to be an elementary school teacher and now she was on the run. What had happened?

He forced himself to scroll down past the picture to the text: She got tangled up with a local gangster after a drug deal went bad. The authorities are closing in on him, but until they get their case tied up, she needs to leave Texas. I’d do this, but she needs you more than her cousin.

“Fuck!” He locked the screen and shoved the phone back into his pocket.

Ethan had known all along who the woman in danger was, but he hadn’t told him. Would he have come to Texas if he had known Allyson was in danger? He wanted to say no, that the road leading to her was closed, but damn it if he wouldn’t have dashed off to rescue her even if she hated him for it. A drug deal? Had she gotten into drugs? What happened to the sweet innocent girl he left behind?

Needing answers, he hopped back into the truck and drove across the street. If there was someone looking for her he needed the getaway vehicle close. In case they needed to get out of there quickly, he reversed the truck into a parking spot next to the steps that would lead up to room twenty-three. He wasn’t sure if she had been mindful enough not to stay on the first floor or if it was just a stroke of luck. Either way, he was grateful she had that extra protection while she waited for him. Being on the second floor would allow her to scan the parking lot from an advantage point and might give her a few minutes to get away if anyone showed up looking for her.

Before he climbed out of the truck he considered for a moment throwing on his jacket to conceal the gun strapped to his hip, but in the end he decided a jacket in this weather would draw more attention than the gun itself. He was in Texas and half of the residents carried, so he’d blend in fine. Plus, there wasn’t a chance he was leaving his gun behind in the truck. He stepped out and with a quick look, he headed for the stairs. If she was waiting in her room, they could be out of there and back to his plane before anyone was the wiser.

He doubted this was going to be that easy though.

When no one answered the door, he picked the lock and stepped into the hotel room. Quickly shutting the door behind him, he took in the room before him. Even in the faint light peeking around the bathroom door, he could tell the whole room needed a deep cleaning. It wasn’t a place he expected Allison to ever willingly stay. Hell, he’d rather be back in the sandbox than stay in that room for the night.

The only sound was the shower running. Alone and scared, yet she was taking a shower with only the standard lock on the door. She hadn’t even bothered to throw the latch. It wouldn’t have stopped anyone but the sound of the bolts being tugged from the door would have been enough noise to be heard over the shower.

The water shut off, leaving behind only her faint humming. Not wanting to scare her, Trever stepped into the shadows next to the bathroom door and waited. Running through different scenarios he considered his next move. What would be the least frightening and the quietest way to make his present known?  A moment later she stepped out of the bathroom, a thin towel wrapped around her body. Needing to make sure she didn’t scream like a banshee at the sight of someone in her room, he stepped up behind her and clapped his hand over her mouth.