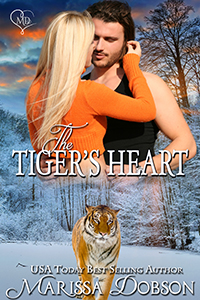 When Raja Harrison, Lieutenant of the Alaskan Tigers, rescues Bethany from kidnappers, nothing will ever be the same. It should’ve been an easy rescue, instead he finds she’s not only injured—she’s his mate. He’d always believed his job was too dangerous to risk having a woman in his life. Now Bethany threatens what’s left of his fragile control.

A rogue shifter wants Bethany Thompson and is determined to destroy all she holds dear, along with the tiger shifter population. When she’s kidnapped and beaten, her whole world tilts on its axis. The shifter problems now are her problems as her family secret comes to light.

Can Raja and Bethany join forces with the other Elders of the Alaskan Tigers to bring down the rogue shifter—or will the rogue destroy all Raja seeks to protect?

There was no way they’d let the rogues get away. Most of the leads turned into dead ends, but they had to explore every avenue regardless. Papers and maps cluttered the table. The search for Pierce filled every hour. The flow of viable information trickled, some of it useless.

The situation ate away at Raja’s gut, while Ty’s agitation shown on his face. They seemed no closer to finding Pierce, yet they sensed his men were in the mountains watching them. His teams of assassins stalked the area, waiting for them. Rarely did anyone leave the compound, especially not the women and children—not with the danger surrounding them.

“Raja, stop pacing. You’re going to wear a hole in my favorite rug,” Ty’s mate Tabitha teased. She watched him over her coffee mug. “We’ve got enough men out there searching the spots Pierce and his gang frequent. It won’t do you any good worrying now.”

He smiled, unable to help it. Tabitha had a way of lightening the mood. Raja hoped his future mate—whoever she was—would be gifted with the ability to make those around her smile the way Tabitha could. She’d been through so much, yet always seemed more concerned about others than she was herself.

He couldn’t sit still. The hairs on the back of his neck stood at attention. Something wasn’t right. Something was about to break, he could feel it in his soul. He ran his hand over the windowsill. Outside looked like a winter wonderland. Thick, white snow weighed down the tree limbs and the weather reports forecasted more snow over the next few days.

He stopped his pacing to update Ty and Tabitha. “Leo and Connor arrived in California and are on their way to locate Pierce’s sister. It’s extremely unlikely he’s there, but maybe she’ll be able to tell us something.”

“Keep me apprised of the situation. I want them back within seventy-two hours, or we send another team. We don’t have time to waste.” Ty sat reading the reports from the teams spread out all over the country, not one of them had spotted the rogues. Pierce knew they were searching for him, but they didn’t expect him to hide. He had blood on his hands, he’d attacked other tiger shifters, maybe he finally knew his days were numbered.

“I need to speak with some of the guards. Raja, could you look after Tabby until I get back? I don’t want to leave her alone in case there’s another attack.”

Once they were alone Raja heard Tabitha push her chair back from the table, and listened to her approach in sock-covered feet.

“Raja, are you okay?” She laid her hand on his back, offering comfort. Unfortunately, it only worked on a mate, but the caring gesture touched him.

“I’m fine. You have enough to worry about. Don’t concern yourself with me.”

“I don’t believe you. If you ever need to talk, I’m here. It will go no further than us.”

“Mates don’t keep secrets from each other.” Reservation thickened his voice.

“To help a friend in need I would do what needs to be done. Raja, I haven’t known you very long, but I consider you a part of my family and can see your pain.” She rubbed his back.

“Thank you, but everything is fine with me. It’s you I’m worried about. I can feel something bad is coming.” He wasn’t being entirely honest. Something else bothered him, but he couldn’t put his finger on it, let alone put it into words to tell her.

“We’ll get through it. We know Pierce is still out there and after me. He has a larger following than we guessed. I know it’s your job as our Lieutenant to worry, but we’ll survive.”

The invisible earbud allowing him contact with command central and the ground teams sprang to life. “Breach. We have a breach at the main gate. All available units respond.”

“Ty gave him the morning off since we were meeting with you and wouldn’t be leaving our quarters. Go. I’ll be fine.”

“Like hell. You have to be protected.” She had her own transmitter, allowing her to hear the same alerts, and fear spilled off her.

“Raja, stay where you are. Felix is on his way. I’m proceeding toward the main gate,” Ty’s order came through the transmitter, further cementing Raja’s decision to stay put.

“Tabitha, come away from the window.” He could feel her reluctance, but his job was to keep her safe. “Everyone always forgets about the windows. You feel safe and secure inside the houses, while the sharpshooter is waiting. Waiting for you to walk past the window.”

The words seemed to frighten her, and she stepped back, visibly paling.

Unlike the other guards, Raja hadn’t vowed to protect her because she was their Alpha Female and Queen of the Tigers. No, his vow had been made to her mate. Ty had saved his ass more than once and the best way to show his appreciation was by keeping Tabitha safe.