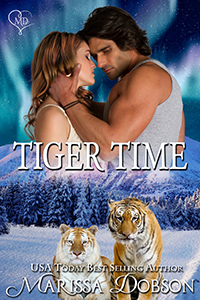 Tabitha Leigh has no idea her mundane life is about to change. Every day she gets up, goes to work, comes home—an average, almost drab existence. Lately she’s been getting sick, and she can’t figure out why. As fever and fatigue consume her, she has no idea she’s being followed—and danger stalks her every step.

The Alpha of the Alaskan Tigers, Ty Reynolds, has been watching her from a distance to see if she will go through the change. When she finally does, he sees more in her than just the future of their kind. Now that she is embracing her tiger side, he must tell her she is the Queen of the Tigers—and she has a bounty on her head.

Tabitha must be protected at all costs, she must embrace her future and her mate. If she doesn’t, it will mean the end of everything she’s come to know and never realized she needed.

Tabitha shrieked and jumped up when she felt the solid body against hers. “Who the hell are you?”

“Don’t scream, Tabitha.” A deep voice called to her as the table lamp flicked on. “You didn’t meet me tonight. I wanted to make sure you were all right. When I arrived, there was blood in the hall, your door was open, and when I stepped inside I found more blood in the entryway. I called the hospitals, and they had no listings under your name, so I stayed here to see if you would return.”

While he spoke, she noticed his body. He was an imposing figure, even sitting. He must have been two hundred and twenty pounds, all of it muscle, with arms nearly the size of her thigh. He reminded her of one of the biker guys who came into the restaurant. His chin-length black hair and broad shoulders gave him a menacing look. The only thing that hinted he might have a softer side was his spectacular ocean blue eyes.

“Didn’t you get the note I left on your door yesterday? My name is Ty Reynolds. I was a friend of your father’s.” He sat there on the sofa watching her, careful not to move as if worried he’d scare her.

Shock must have shown on her face, because before she could say anything, he added, “I’m not here to hurt you. If I wanted to hurt you, I would have done so already. I made a promise to your father that when you were old enough, I would tell you everything, and I would do everything I could to protect you.”

“I don’t care who you are. I want you out of my apartment.” She walked over to her door and opened it. “Please leave.”

He frowned, glancing down at the blood stains on the floor. “You’re uninjured but there’s the question of the blood. What happened here?”

“Alice.” A lump formed in her throat as she fought back tears. The single word came out softer than she intended, as if it was a reminder to herself of the terror that had played out only hours before. Alice—dear protective Alice—would’ve had a fit if she knew Tabitha was alone with a man who’d broken into her apartment. “She’s a friend of mine. It’s her blood, but that’s none of your business. Now leave.” Tears stung the back of her eyes. She refused to weep. She was tough, she’d been through awful things. But this sickness, whatever it was, heightened her emotions and made her want to fall apart. What’s happening to me? She’d been asking that a lot lately.

“Listen, Tabitha, I know you’re scared, but you need to hear me out. Please just give me ten minutes.”

“You broke into my apartment and now you want me to listen to you? I don’t want anything to do with you.”

Tabitha Leigh staggered up the steps to her cramped studio apartment. A plain white envelope was taped to her door, piquing her interest, but she was too exhausted and sore to care. Licking her dry lips, she realized the fever had taken a toll on her body, last she’d checked it was a hundred and one. Her weak muscles barely carried her up the steps.

Despite this, she couldn’t sleep. Night after night, she lay in bed glaring at the ceiling, her thoughts filled with visions of a far off place. Deep inside she felt a desire to leave, to start over somewhere new. When she thought about where she wanted to go, the only place she could picture herself living was Alaska. Odd, since she hated cold weather and snow more than anything else. Beside her bed hung a beautiful picture of Alaska with the aurora borealis lighting up the sky. It was the last thing she saw before going to sleep at night. Her coffee table was littered with brochures and Alaskan travel books.

She grabbed the envelope from her door, planning to toss it on the table to deal with later, but the moment her hand wrapped around it, she felt lighter somehow—calmer.

The steaming hot bath she longed for could wait a few minutes. Plopping down on the sofa, she tore open the envelope. The stationary was soft, yet heavy. As she unfolded the page, the masculine scent of cologne assuaged her, rich and fragrant. Not from the landlord then.

I was a friend of your father’s and I need to speak to you immediately.

A number of questions ran through her head. Had he really known her father? Maybe he could tell her about her parents and why she’d been left in the state’s care.

Even if Ty answers some of my questions, I don’t know him or what he really wants.

Foster homes had made her cautious of others. It was hard to make friends when all she’d been surrounded with were people who were out for themselves.

She wouldn’t go. She wasn’t much of a risk-taker, and this was too big of a risk. As she laid aside the letter and went to take a bath, her brain told her she was doing the right thing.

But her heart wanted answers.

Relaxing in the blistering hot water with lavender bath salts and a touch of vanilla normally eased the tension from her body. Tonight it did nothing to ease the tension in her muscles. The letter bugged her. She cursed its timing. Why now, when she was at her worst? This sickness was awful. She didn’t want to be bothered by anyone, least of all a stranger who might have known her family. The exhaustion in her body gave way to a miserable depression that took hold of her heart and wouldn’t let go. She had so much darkness in her past, and she wanted answers. But now?

“What shitty timing,” she mumbled, sinking into the water until her chin touched the surface of the foamy soap.

Saying he was a friend of her father’s wasn’t something that would make her want to meet him. She knew next to nothing about her parents. They could have been murderers for all she knew.

No, they weren’t murderers. The caseworker said her parents died in a car accident when she was a year old. Not that she remembered any of it. Thanks to a very nice police officer, she had a picture of her parents that had been taken a month before the accident. It was the only treasure she had from her family as she moved from foster home to foster home. Even now, she kept it next to her bed.

A year ago, on her eighteenth birthday, she aged out of the system. Her caseworker, Bev, handed her five hundred dollars and told her to leave. The only constant in her life until that point was suddenly gone. Bev had only been doing her job and now with it done, it was time for her to move on. There was certainly another child ready to take her place.

Tabitha dunked her head under the water as the memory of how exciting and scary that time had been came flooding back. All her life she had been tossed from home to home like some unwanted pet and she hated every minute of it. Until the day she was told to leave, and she had nowhere to go. Trying to save every dollar she could, she ended up in a fleabag motel, scared and alone. The worst part was not being able to find a job. It was an endless cycle. No one would hire her without an address, and she couldn’t get an apartment without a job.

She had been desperate when a little mom-and-pop family restaurant hired her to clean tables and wash dishes. She didn’t care what kind of work she did as long as it kept a roof over her head. The day after she was hired, she found a little rundown apartment two blocks from work. Thanks to Alice, her best friend and fellow foster child who lived in the building, she was able to rent it without a deposit. It wasn’t much—only a studio—but it came furnished. The day she moved in, she had nothing but a suitcase full of clothes.

Alice had aged out of the foster care system a little more than a year before, and she suggested living across the hall from each other would provide a sense of security. Their bond was strong, but Alice was preoccupied with her boyfriend, and only had time for Tabitha when Mike wasn’t around. For the first time since they’d become friends, there was distance between them, and Tabitha worried about Alice all the time. She couldn’t help it. Both women were troubled and had their own unique issues, but Alice’s worst downfall was that she always chose the wrong men.

Tabitha thought again about the letter. She and Alice often mused on how they wished they could learn something about their families, about where they came from. Now Tabitha had a chance. Whoever this Ty person was, he knew something about her origin.

I don’t know what to do. She sighed heavily, torn by indecision.

The bubbles were gone and the water grew cold. Tabitha wasn’t sure how long she’d been lost in her memories, but it was time to move on. Grabbing a towel off the rack, she wondered if she would ever find her place in the world.

What is my purpose? Why Alaska?