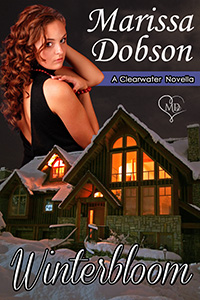 Prepping Winterbloom for the incoming snowstorm is the only thing on Chloe Frost’s agenda when a stranger comes in from the cold.

What he’s looking for…

Tortured by the past, Jordan Sheppard fled everything he knew until his car broke down and sidelined him.

When this unexpected guest needs a room, these two lonely souls find refuge in each other. Can Chloe help Jordan discover a path through the pain and anger to find love?

Chloe Frost danced around the living room. She enjoyed having the place to herself. She sang in tune with the song playing on the local country radio station while she finished her storm preparations. Everything needed to be in order before the blizzard lashed her sleepy little town. It would be her first time at Winterbloom alone during a storm and she wanted to be prepared.

Slipping out to bring in another arm full of firewood, a strong, unforgiving wind assaulted her. Hurrying she grabbed as much wood as she could carry, the snow drifted deep already. Thank God I am not out in that. Inside, she fought the door shut.

Carved right in the side of a mountain, Clearwater, Wyoming always received a lot of snow but this storm promised to put even the most seasoned residents to a test. They expected Ezekiel to stall over the area, and last four to five days, dumping up to ten feet of snow.

Dropping the wood next to the fireplace, someone called out behind her.  She whipped around and fumbling for a log to wield in her defense. Not expecting anyone, the radio was louder than normal. She liked listening while she worked.

“I see the hospitality continues. Are you really prepared to beat away a customer?” A man loomed in the doorway to the living room, filling the space.  Annoyance harshened his voice and his rumpled clothes looked as though he slept in them.

Holding onto the log, she fought to get her shallow breathing under control. “I wasn’t expecting anyone. I’m sorry, but we’re closed.”

“Uh, that could be a problem. My car died about a mile up the road. I was hoping I could call a tow and find a warm place to wait out the snow. It’s supposed to be a hell of a storm.” He lowered his duffle bag to the floor.

His clothes were soaked through and crusted white with snow. The man wasn’t an attacker out to get her, but someone genuinely in need. Guilt poked through her unease and she put the log down.

“I’ll call Pete’s, but I’m sure he won’t be able to look at your car until after the storm passes. Why don’t you go upstairs to the first room on the right and change? I’ll give him a call and get you some hot coffee. The bathroom is at the end of the hall.”

He nodded gave her a brief, but grateful smile and swung around, his boots making a thumping noise as he made his way to the staircase.

Picking up the cordless phone, she wondered why he would be traveling with such a storm heading their way. It has been on the news for days, everyone rushing around to prepare, it was impossible not to know what was headed towards them. His rumpled clothes and unshaven face made her think he had been traveling for a while. He might be stranded by the storm, but everyone had a story—maybe his went deeper than just stuck on the side of the road.

“Morning, Pete. This is Chloe. I have a guest that says his car broke down about a mile up the road. When you get a chance, could you tow it back and see what’s wrong with it?”

As expected, Pete raged about the storm, and the number of calls he already received. His life was tougher than anyone else’s. The best way to deal with it was with sympathetic noises and acceptance. He moved at his own pace.

“Yeah, it’s going to be bad. Whenever you get to the car is fine. I told the guest it most likely wouldn’t be until after the storm. I’d hate to see you out in this when it’s obvious he’s not going anywhere until this passes.”  She grabbed two coffee cups from the cabinet and filled them with steaming coffee. The front door slammed closed startling her. She spilled a couple of drops on her chest and hissed at the scalding heat. Is he leaving?

“Pete, don’t rush. I have rooms available. He can wait out the storm here. Just give us a call when you know what’s wrong with the car.”

Sheriff Ryan Ryder walked into the room and she ended the call. His tall frame stood in the kitchen doorway, a hand on his gun like a character leaping out of the pages of some novel from the old west. It was a natural pose for him. His thick winter jacket open enough to show the dark blue uniform shirt pulled tight against his broad chest. “Chloe, is someone here? I found a broken down car about a mile from here and there are faint tracks leading this way.”

“Yes. A man came in about ten minutes ago. His car broke down.” She handed him a cup of coffee. She would have to pour another for the guest.

“You don’t know him, Chloe.”  He frowned, temper stewing in his voice. He had been on her case since Granny passed. The bed and breakfast was too far out. She was alone. Running it on her own was dangerous. Over the last few weeks, the number of fights they had about Winterbloom escalated. It was her life. She grew up here, helping her Granny with chores for as long as she could remember.

“Ryan, I run a bed and breakfast. I rarely know my guests. This is no different than any other time. Why are you so upset?” Impatiently she glared at him. She didn’t have time to have this conversation with him again. There was still a long list of things she needed to be done before the storm, not to mention she now had a guest. Granny always taught her to be prepared for anything, the refrigerator and pantry were both full.

“Upstairs. He was covered in snow, I assumed he wanted to shower and change. Why?” She took a sip of coffee and watched him over the rim of the mug. If she kept it casual, it might relax his overprotective instincts.

“I want to meet him. I can take him into town; you don’t need to be here alone with him. You have no idea who he is or what he wants.”

“I run a bed and breakfast.” She repeated the stance. If she said it enough, he might finally believe her. “He wants a room to wait out the storm. I’m not going to have you interrogating my guest. It’s bad for business.”

“I don’t like you running this place all by yourself. I’ve seen too much in my line of work not to be concerned about you. I don’t want anything to happen.” The fear in his eyes aroused a fresh wave of pain through her. His concern for her safety was the same reason he went into law enforcement.  Crime marred his life long before he came to Clearwater. When he arrived, fresh out of the police academy they became instant friends.  Their friendship grew closer as he rose from deputy to sheriff.

“Clearwater is one of the safest places because we have you as Sheriff.” Placating him never used to be this hard. When Granny passed, he took on the role of her protector.

“Flattery will get you nowhere, Miss Frost.” But he laughed. “If you insist on running this place by yourself, how about a dog?”

“We talked about this before. I want to find the right one. Winterbloom takes a lot of work, and I don’t have time to train a dog.”

“So you will take a dog if it’s trained already?”

Was that a trick question?

“Of course.” She agreed. “I’d love the company, but I can’t take the time right now to do dog training justice.”

“Good, because I have just the one for you.” He placed his empty cup in the sink and strolled out of the kitchen.

Shock rippled through her. Did he just say he had a dog for me? “What?” She jogged after him. “I didn’t agree to anything.”

He turned to face her. “Chloe, you want me off your back and this is the only way. I will be worried sick with you out here by yourself with a strange man. In this weather, the response time won’t be good, especially with the mountain roads. I want to know you are safe. Goldie will keep you safe.”

“Blackmail is illegal.” She’d already lost the battle.  Amusement edged her frustration over the very neat trap he set for her. She agreed before he told her, so it wasn’t like she could really argue with him. Ryan was like a brother to her, and she didn’t want him to worry about her. If a dog alleviated his concerns, then apparently she’d take the dog.

Plus, it would be nice having some company until the paperwork clears to open Winterbloom again.

He winked at her. “I’ll be back with Goldie and her things shortly and when I do I want to meet your guest.”